One of the big focus of the #AAASmtg was on Science Communication and Public Engagement. This is understandable and expected, due to the actual general distrust of science and when more than 70% of the population cannot name a single actual living scientist. How can they believe and trust something (or someone) that they cannot relate to?

But who are “they”? Who’s your audience? Saying just “the general public” is not enough, it is just too broad. Yes, you should speak in a language that is accessible to non-scientists, but you should also focus on your audience. You can reach people many ways – but in the end people listen to their peers, and we must be aware of this community engagement. That’s why it is important to think about the community engagement versus individual engagements! In order to do that, it is important to engage decision-makers. This requires a long-time engagement, partnership, and building trust. There are three different types of engagement: conventional (top down), thick (slow, better results, but hard to do), and thin (fast and easy). Thick and thin do complement each other – important to work on both!

Listen, interact, and be inclusive #AAASmtg

Shut up and listen. Scientists are used to communicate their research through talks, in a monologue form. But communicating science should be a dialogue! You need to be able to communicate your research to laypeople and by the end answer the question “so what?”, giving details and directions. It is not that you have to abandon all your knowledge. (“Don’t be such a scientist” @sciencequiche). Don’t give up your expertise! After people understand you, they will value your expertise and there’s an increase of trust. Trust is the key word here, and this is a two-way street that can only be achieved if you stop just talking but start to listen as well! 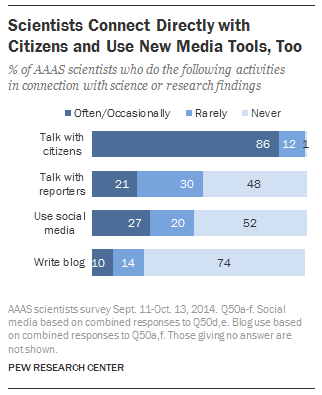 Most scientists agree that they should do Science outreach, and many believe they already do so. But data from a PEW RESEARCH study show that although scientists do engage with other citizens, they are less likely to talk to reporters, use social media, or write blogs. One of the main reasons is because all those engagements TAKE TIME, and time is precious in academia! But the big problem is that most scientists don’t see public engagements as something that can improve their career. Science outreach is not motivated by the institutions, and in many cases, discouraged. That’s why it is important to build a community on your institution, where science outreach is normal and accepted.

It is important to train early career students on how to communicate science in a broader level. #AAASmtg

Scientists are trained to communicate their research in a technical level, but not to talk about its impacts to society. This is not an easy task, as our research usually is so specialized and requires a lot of background knowledge to be fully explained and understood. Currently, science journalism is the major mean through which the public acknowledges scientific discoveries. Scientists usually do not like that, as there is an eternal battle between objectivity vs subjectivity (and there is a lot more about this that I won’t cover in this blog post, but let’s say that this relationship… is complicated!). But not all scientists work with research that will make the NYTimes. Those are only a few percentage of us, and it is important to share not only the big eureka moments, but the small bricks of basic science that eventually will build the wall of knowledge!

Overall, scientists should do more public engagement. But besides being aware of this and communicating your science with people around you, one should learn how to communicate it. Also, public engagement is not something a scientist do just because you “should” do it. We are passionate about our science, our research – it can be fun to pass this to the public. And the more you interact, the more you learn to communicate your science in a broader (and more reachable) language.

PS: This is the third post of my series “My first #AAASmtg”. Here are the links to previous posts about expectations and personal impressions.
PS 2: Further reading: “Science Communication to the General Public: Why We Need to Teach Undergraduate and Graduate Students this Skill as Part of Their Formal Scientific Training“

2 thoughts on “My first #AAASmtg: on Public Engagement”